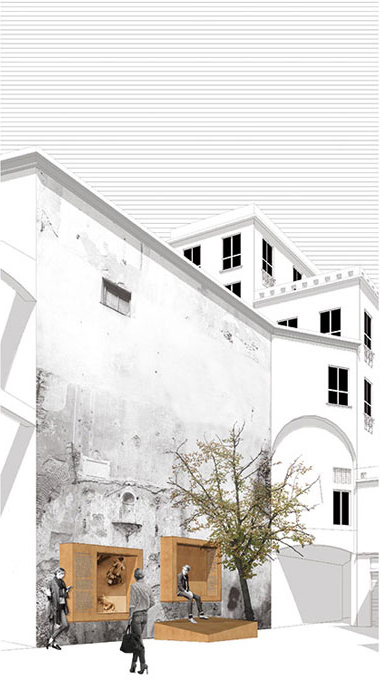 A contemporary monument to Memory turns into a “usable action” by the comunity to achieve a re-qualification process. It ends to be a mere observable object. There is no more just an emotional relationship between the work and the observer , but it becomes an active element able to interact directly with the human being.

Our proposal shows the characteristics of a contemporary memorial. In addition to performing its primary function, that is, triggering a reflection on the theme in observers through photos or text, the memorial also becomes a device enjoyable by the community in order to implement rehabilitation processes. So a monument can ceases to be an object to be observed, there isn’t only an emotional relationship between the observer and the piece anymore, but it becomes an element which can interact directly with the people. A memorial that can be described as an urban landscape. A coloured concrete memorial is a support for a picture and a text, it is an object where you can sit, lie down and socialize. The project invites you to think about the Italian terrorism in the Seventies and the powers that it had fought against such as culture, work, the State, public order and the press. To show this intent five locations were chosen near the places where those powers were involved. To understand the relationship between the reference symbol and the site of intervention better, as well as to connect the two ends of a system, it is arranged that, in the proximity of the two points, elements are located which explicitly signal this relationship.

One of the competition aims was redeveloping one or more of the project sites. This purpose becomes a cue to discover and work in central places, still unknown to the community, and at the same time in locations in need of upgrading in order to transform those into an ideal relaxing place.